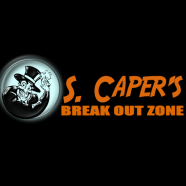 Posted by escapegamesreview on June 30, 2015 in East | Leave a comment

S.Caper’s Break Out Zone is located in Whitby just off Consumer’s Drive.  After running out of escapes to do in the city we decided to take a small trek out east to try this new entry to the GTA.  It took us a while but our GPS set us straight into an office complex and at the back we found a small sign that said S.Caper’s.

When we arrived we were told to sign waivers and waited for our turn.  After storing things in lockers Gamemaster Justin walked thought we booked the Toy Room, which we corrected him that we booked the Old Western Jail.  It seems there was a slight booking hiccup and a group that finished their other room (the Toy Room) wanted to play the Jail.  We were asked if we wanted to play the Toy Room in the meantime, but decided to chat with Justin instead.  More on that later, but here’s the review

The Old Western Jail had some nice parts to it.  The props felt solid and set was overall well put together.  To be nit-picky after doing some of the great prisons in the city, we’d have hoped for iron/metal bars.  The other details however are well done and nothing feels cheap or worn.  The only thing that takes away from the experience was the exit.  So far each of their rooms has an attached alarm system.  If you leave without deactivating it, it sounds off the alarm (which is S.Caper’s method of locking the door instead of providing an emergency key or whatnot).  The reason is a business reason, but when you’re stuck in the Old Western Jail it doesn’t seem to fit well.  Again something its something very minor.

The room was mainly lockboxes, however the puzzles were cleverly implemented.  There was one task-based puzzle that used a combination of objects as a simple ‘finding’ puzzle, as well there was a fun meta puzzle.  We didn’t experience any technical difficulties or see any safety issues which was good.

Intuitive (aka Frustration Level):  Was it solvable? or Did you have to be inside the creators mind to solve it?
Score:  5.0 of 5.0

The great thing about the room was it presented enough clues.  Gamemaster Justin pointed out that he had a bad ‘North York’ experience where the puzzles weren’t clear and other puzzles didn’t work.  He focused his games to provide enough clues to help the players.  For each of the puzzles (if you look hard enough) they don’t require any logical leaps and in some cases the answer was staring right at you.  Overall the game was very polished, and he explained that he makes changes on a weekly basis.

The room uses a door-bell/light switch system for hints, which calls in the gamemaster.  We didn’t have any issues with this.

Gamemaster Justin had quite the story, it starts the same as alot of other escape room owners that he and his brother decided to open up their own after playing some very bad rooms.  Where it diverges is that they had a bit of bad luck.  It turns out S.Caper was supposed to open up months ago, but got delayed cause their unit caught fire AND flooded.  Justin has told us since then it seems they are receiving alot of local and corporate clients.

The current price is $20 per person which for a similar experience in the downtown core is a fair price.

Overall: S.Caper was a bit of a surprise out east.  The Old Western Jail was well-themed and had great puzzle design.  I think experienced escapers may find it on the easier side but we think they will appreciate the details.  We hope to revisit Justin and S.Caper the next time we head eastbound.