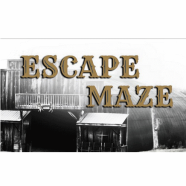 Posted by escapegamesreview on August 15, 2015 in East, Peterborough | 1 Comment

Escape Maze is located in Peterborough on farm land.  We were on our drive back from our Ottawa trip and planned to stop by to finish our tour.  It seemed the GPS was leading us to the middle of nowhere but we ended up on a farm with a small barn that said “Escape Maze”.  We walked in and was greeted by Gamemaster Scott who filled us in that it was his family’s land and Escape Maze was a family operation.  We’ll get more into the details later.

Escape Maze opened up with a video introduction about the gold rush in Peterborough back in the 1800’s.  Gamemaster Scott later explained that also hope to give an educational experience along with the escaping, which is great.

The room itself didn’t really have any story to explain the reason for escaping, other than to learn the lessons before being allowed to leave.  The room itself is well built and definitely custom made, everything was wooden and solid.  I haven’t been in a old classroom before, but it was everything that I’d imagine it to be.  The props were very much the same, from the wooden blocks to the child-sized chalkboards there was quite a bit of detail in the room.  I did manage to get a splinter from all the wood in the room, so it would have been good if the room was sanded down better (and some waterdrip from the condensation of the air conditioner).  Otherwise “A-” for effort

The room stayed true to the theme and kept everything low tech.  On the other hand tech lovers wouldn’t find much to celebrate in this room, but in this case simple worked well.  There was one surprise element that caught us off guard and it was well done.  I guess you could also chalk up the splinter as part of a ‘safety issue’, but it was just a splinter.

Intuitive (aka Frustration Level):  Did you have to be in the designers mind to escape?
Score:  4.0 of 5.0

For the most part the game was straightforward.  Two puzzles had a few very minor issues, where it felt there wasn’t enough direction provided.  For one puzzle there was a bit of a logical leap, you would need a decent grasp of the english language to solve it (which we feel some players might not make).

The hint system uses a school/crier’s bell (.. at least I think that’s the name) to ring the Gamemaster in.  We didn’t have any issues with this.

Gamemaster Scott was great to chat with.  He told us how Escape Maze is family run and the idea came about on a family trip to Europe.  Scott’s mom wanted to start one up, and with the ideal land space they decided to focus their overall theme on the gold rush.

The price was $25 / person, which for a 45 minute experience is on the higher-end.  Although at the same time they don’t have any other escapes in the area.

Overall: If you’re bored of the tech or big city escapes, Escape Maze offers something unique that has a very immersive set design and is even educational.