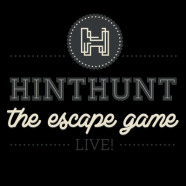 Posted by escapegamesreview on March 7, 2019 in Mississauga | Leave a comment

Hint Hunt is located in Mississauga, in a strip plaza right near some epic dessert places.  We heard about the franchise from a few friends and were curious to try it out.  Hint Hunt is a world-wide franchise that boasts locations in large cities like London, Budapest, Cairo, Dubai and Paris.  We were accompanied by E4G’s Leader a week after their opening day.  The Lobby was a bit sparse and initially they lights were off (I don’t think they were expecting visitors).

Long story short:  You are investigators looking into some…. family drama?

Creativity and Design: Did it sell the story / theme?
Summary: Good set design, but it didn’t feel sturdy and missed a few notes on immersion.

+ The set design was well done, the lighting and props were great.
–  A few props in the room felt a bit forced for the sake of adding ‘fun’
–  certain furniture props felt fragile, so we were careful when dealing with them.
–  one set of props felt a bit unsafe

Bells and Whistles: Was it more than lockboxes?
Summary: Nothing fun to note.

Intuitive:  Did you have to be inside the designer’s mind to solve it?
Summary:  More direction could be provided, they will need to work on their hints

+ The puzzles were largely task based
– The hint system uses onscreen hints, that we didn’t find too useful
– some of the searching involved manipulating props, which was more frustrating than fun

The Staff at Hint Hunt were friendly and pretty green (especially given we visited them within 1-2 weeks of operating).  They were nice enough to give us extra time to escape after there was a minor malfunction.

Overall: I think for a franchise that has spread to as many countries as Hint Hunt has, we were expecting better.  The room felt more frustrating than fun and although it looked nice, we were too afraid to break anything.  I’d probably give other rooms a look before diving into Hint Hunt